Showing posts from March, 2011
Show all

Our second challenge in the Edublogs Student Challenge is about creating online identities and leaving quality comments on other blogs. Avatars and comments go together because when the avatar is uploaded to the user's name, it shows when the making comments. Activity 1: Create our Class Avatar Slideshow Part 1: Make an Avatar Each individual will create an avatar using the options I have listed below. Avatars are digital representations of yourself. Decide what you like the best, and what represents your personality or traits. Build Your Wild Self This site is from the New York Zoos and Aquarium, which allows you to become a person and animal hybrid. This is the "Wild Self" my 5 year old daughter created for me. She did not like the spider leg or scorpion option, but it was fun to try. You'll need to print screen to capture your picture for this site. Picasso Head This was a fun site to build a Picasso-like head. No sign up is need
4 comments
Read more

Students are Challenged to Blog

March 26, 2011
One of my highlights this past week was the day I spent team teaching in Mrs. Martinez's 4th grade class . We have entered the Class Blog Student Challenge : A global blogging challenge for students of all ages. During the past few weeks, we have focused on setting up our blog (posting guidelines), Internet safety, and how to leave a comment for others. We are now ready to start on the actual challenge . Group 1: What should we blog about? What can we write about that others will find interesting? What will readers learn from our blog? What can we contribute that could help others? Group 1 Blog Prompt: Why should students and classes visit our blog?   Group 2: Compare and Contrast "About" pages You are a detective looking for similarities and differences between the "About" pages on the blogs in our Blogroll? What is similar and different with our "About" page and theirs? Use our graphic organizer, and take notes as you find answers.
2 comments
Read more 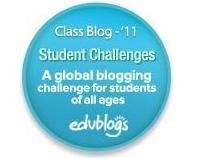 As part of the Edublogs Challenge , I am learning how to start a class blog. It's very important to include the families in this process. I used Kathleen Morris' fabulous example to guide me in creating my letter to introduce the class blog. Here is the first letter that I'm sending home with the students in the class : Dear Families , I am proud to announce Mrs. Martinez’s class blog. This blog is for both of her language arts classes. I want to thank Mrs. Martinez for allowing me to team teach with her as we introduce blogging to her classes. For those of you who do not know me, I was a 5 th grade teacher at your school before I became the Technology Integration Specialist for AJUSD. While my Master’s in Education focused on Curriculum and Instruction, my specialties include project-based learning and technology integration. Again, I want to thank Mrs. Martinez for allowing me the ongoing opportunity to team teach our blogging project. About the Blog
4 comments
Read more

I love this project because it takes their 1st grade science standards and marries them to the reading, writing, and fluency standards. Students had to research their animals, write riddles, work on fluency, and topped it off with digital illustrations and publishing . Google Docs Drawing Ms. James' students were introduced to the netbook cart and Google Apps Drawing during this project. They loved using the shapes, layering them, and adding color. Collaboration VoiceThread allows others to comment on the project. I was amazed at the comments left by an elementary grade student. This added another dimension to the students' original project. It added a digital audience. Fabulous! Click here to view Part 2 of their Riddles on VoiceThread . Thank you Ms. James for allowing me to collaborate with you on this project. Thank you for allowing your students the opportunity to appropriately integrate technology for learning.
2 comments
Read more 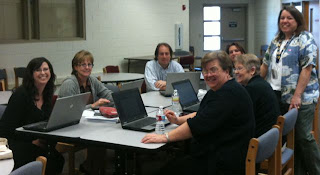 Recently I read a post by Nick Sauers titled, "Common frustrations with one-to-one ." He found that those who were frustrated with one-to-one had issues with lack of professional development, and weak infrastructure. To his second point, I have to say kudos to our Tech Department because I don't know of any infrastructure issues because everything was exceptionally planned out. To his first point, I have learned a lot about the professional development needed in a one-to-one environment. Adjusting the Professional Development I had been training them in one swoop -- so one training of this or one training of that. Those who were tech savvy, needed that one time of show me the basics and I'll figure the rest out on my own. Well, that was the minority. There were several who would ask me some basic questions about technology integration, and it became clear to me what needed to happen. They needed small doses over a continued amount of time. Ongoing, Small
2 comments
Read more

My experience of introducing one of our 4th grade classes to blogging, as part of the Edublogs Challenge , has offered new insight on starting a class blog for learning. Our focus today was introducing the concept of quality comments. How do you get Discussions Started on your Blog? A blog's success can be measured partially by the blog comments; therefore, it's important students, parents, teachers, and administrators, learn how to do this. I realized this is a lesson that must explicitly be taught in order to promote the type of blog discussions where readers respond to each other in continued conversations. We used Edublogs Teacher Challenge -- Student Blogging Activity 3 -- Teaching Quality Commenting to start our class discussion. Compare Websites to Blogs We needed to start by connecting their prior knowledge, which was websites. What's the same and what's different between the 4th Grade Science Website and a Blog ? Our learning point was blogs
4 comments
Read more

March 03, 2011
Principals and Coaches came together to discuss school-wide professional development and community. Staff Development & School-Wide Professional Community on Prezi We started by sharing what's been successful with collaboration coaching. One of my favorite quotes was from Gina Fraher: My triumph in collaboration coaching is twofold.  I have made some valuable relationships and learned some tools to foster new relationships.  The second triumph for me is personal.  I have been given valuable tools, resources, and mentoring in technology that I never would have had if I had not done this coaching program.  I feel that this has been the single most valuable opportunity I have been given in a long time. I loved the discussion that arose when we compared collaboration coaching to a day on the slopes. Some key points brought up were: You can't start off on the black diamond runs, you need to start on the bunny slopes. Some people take longer on the bunny slopes than
2 comments
Read more
More posts